Secrets of Midlife Women – or The Rise of the Queenager

This research is a portrait of a new kind of midlife woman.

As a journalist – columnist, award-winning editor, Editorial Director The Sunday Times, Chair of Women in Journalism 2014-2021 – my job was to read and create the zeitgeist. My antenna showed me these women were not being represented in the mainstream, the data we’ve collected in this biggest ever dataset on this cohort backs up that hunch. The enthusiasm with which this cohort have embraced Noon and our optimistic take shows the hunger and enthusiasm for this kind of targeted content for the midlife woman. But big brands, media and social media have not yet caught up… this research is ahead of the curve. These insights into this under-served cohort can drive business opportunity and a new growth area. It is not just the right thing to do but a commercial opportunity.

About the midlife woman

This is a pioneering generation who are now aged 45-60, who entered the workforce in greater numbers than ever before and have worked all the way through from leaving university till now. Nearly a third of university-educated women aged 45-60 don’t have children and many of those who do have returned to work after raising their families.

It is all there in the numbers. In 2019 census, women over 40 out-earned women under 40 for the first time ever. These women – we call them Queenagers – are financially solvent, driving 93 per cent of consumer decisions, but are underrepresented in advertising and the market. These women don’t want their mothers’ midlife or to be defined by a lazy menopause label – that’s like branding teenage girls as ‘menstrual’ and you can imagine how much they would hate that!

Queenagers don’t want to be invisible anymore. They demand to be heard. And it is important that they are for all the women coming up behind them: We want women to look forward to being 50 as the age of opportunity. One woman puts it: “I feel like a teenager but in my own house, with posh sheets and nice tea.”

The Noon Research is the most in-depth study of ABC1 women aged 45-60 undertaken in Britain. We did it with: 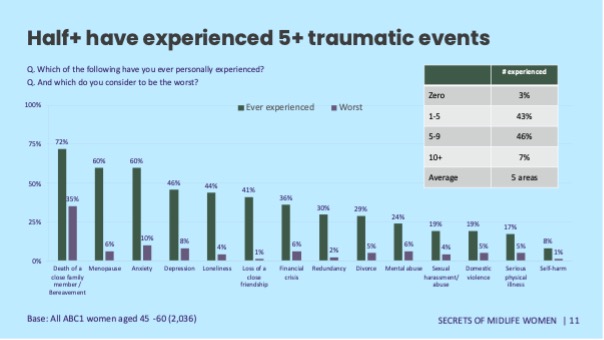 But it is the women who have been through the fire who are now the most confident, happy and solid in their lives. Their wisdom is hard-won – they have survived and are now flourishing again.

If you would like to work with us on retaining your midlife women, understanding the commercial opportunities of this midlife cohort, refining the tone of voice you use with them, or to use the Noon community to sample your product or messaging get in touch with us at consulting@inherspace.co.uk.

Nobody is asking these women what they think – our researchers said they’d never come across a cohort so eager to be heard.

Work with Noon and harness the power of these women