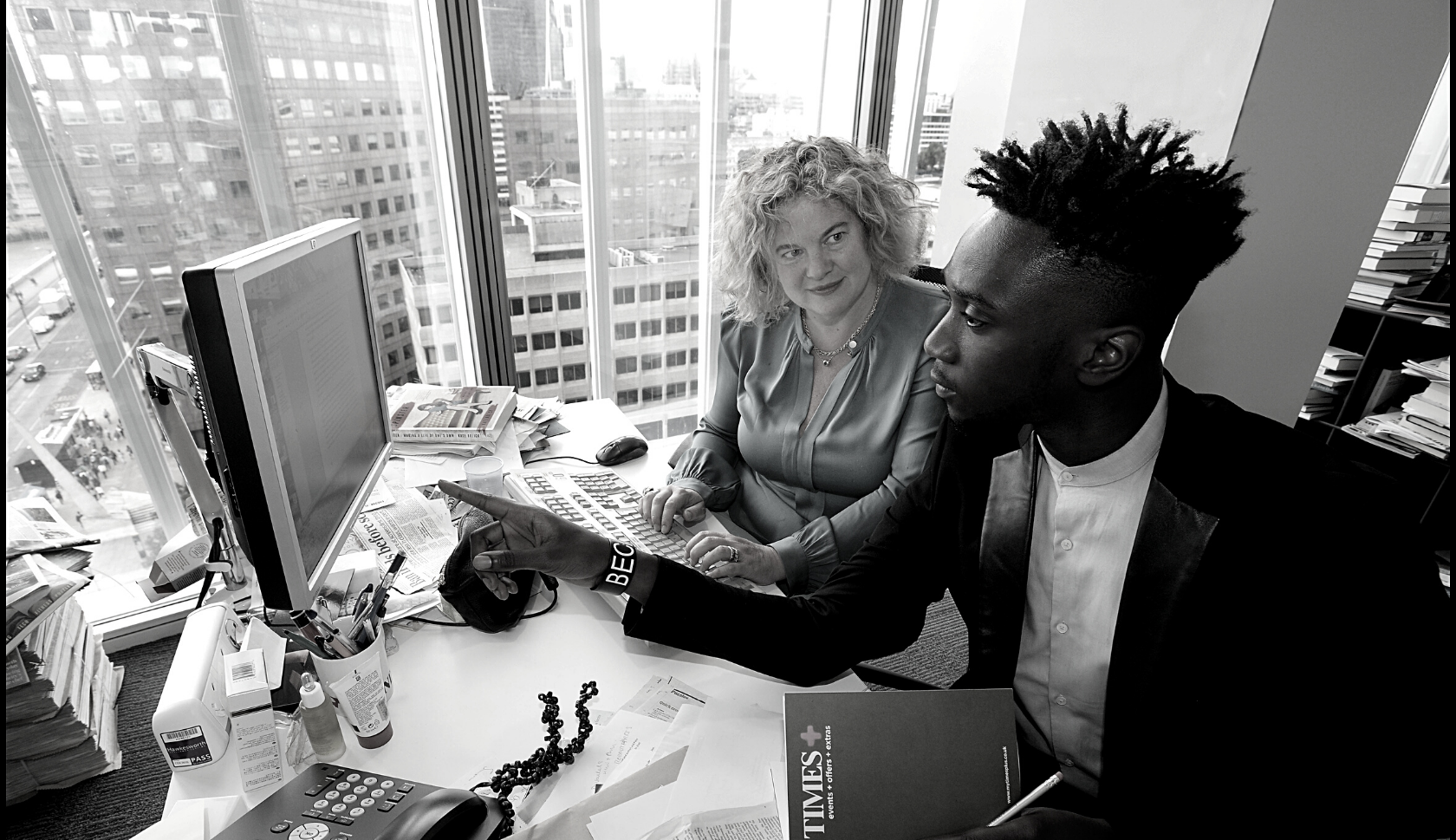 The hands of the clock tick round but time has stopped. It’s all white noise. The boss and the head of HR are sat at a desk. There is a discreet box of tissues. It’s THAT meeting. It’s happening. The rumblings about job losses are true. It’s you. Panic. The mortgage. The overdraft. Your LIFE!

The head of HR is talking legalese, passing pieces of papers with numbers on them. The chair is still there but you are falling. It’s physical in your gut. Like being in a car crash. The mind freezes. It’s the moment your brain will return and return to, in dreams, in low moments, when “if onlys” gnaw at your mind. Then there’s the rejection.

What redundancy means in your 50s

If you’re fifty and being made redundant –  unemployment in 50-64 year olds is up 50%, from 2.7% to 4.1% in the last lockdown according to Office for National Statistics data –  then you may well have been in your job for a long time. I’d done 23 years at my firm and I loved it. It wasn’t just my living but my life. I’d poured love and energy into my work; the job’s needs trumping almost everything.  My mum used to warn me: “The graveyards are full of indispensable executives….” But I’d been so driven.

Then suddenly: Gone. The stuffy office. The awkward looks. My banging heart. All that passion and time reduced to a disposable line on a Finance spreadsheet.

What happened after I was made redundant

In the immediate aftermath I walked out of the building, beside the river towards the station, tears streaming down my face. I didn’t call anyone I just tried to absorb the news that my life was changing so completely. In the following days I floundered. I went home and told my family. I got a lawyer. I sat in bed and binge watched The Crown; one episode after the other, blanking out thought.

I felt raw, naked. I’d worn a big velvet cloak of status for two decades, now it was gone. Who was I without it? Where did the job end and I begin – what was my identity now? I felt so rejected, so hurt. It was stupid to be surprised – as a boss I had done my fair share of being the person who committed the executions. We all used to joke that at some point it would be our turn, that when it came to that moment, in that room, it wasn’t personal it was just about negotiating the best settlement. But the reality of it was such a heart-stopping shock. A trauma.

I began to search online for something that might help. When I Googled Redundancy I got the HMRC website. Then a listicle “Five things to do if you’ve been sacked”. I craved a story, I wanted something to read that summed up how I felt, that would provide comfort, give me a path out of the dark wood… a map of what my next chapter could look like and how I might get there. There was nothing.  I felt alone and lonely, dumped, humiliated, spat out by the company to whom I had given so much. I was bombarded with kindly meant emails chronicling times past and thanking me; I felt I was reading my own professional obituary. That I was dead. I cried a lot.  I tried to go away for a holiday; but no sooner had I landed on my sunny island than lockdown happened and I had to fly home again.

And just at that point, I got COVID-19. It was terrifying. I was lying in bed shivering as Boris was taken to intensive care. Two weeks later I emerged weak and shaken; I was in my 50th year and for the first time I felt every second of my half century.

It was the first lockdown. I went to meet an old friend in the scruffy park behind my house. We sat on a bench in the sunshine and drank Pimms out of a tin, it was midday. On a Monday. “How are you?” she said. I tried to say, “Fine”. I’m known for my cheeriness. Instead I wept, and hiccupped. I felt sad and guilty and old and lost. She gave me an illegal hug and said: “Change is Difficult.” It is such a tiny phrase but to me it was a lifeline.

It’s OK to feel not OK

She had given me permission to find this tough. It was a relief to admit how bad I felt. Too often, well-meaning friends and family had said: “You’ll bounce back, don’t worry!” My old boss emailed saying: “You’re bound to fall on your feet.” But that sent me into a spiral of ‘how’ and anxiety about ‘what’?  The newspapers made for grim reading, a couple of charities described 50 plus workers as at risk of “being on the scrap heap” and the numbers of discrimination cases brought against employers on the grounds of age is on the rise. An added horror for my Generation X age group is a a sense of déjà vu. Many of us saw our own parents careers and lives wrecked on the high seas of the Eighties recession, or graduated from university into the slump of the early 1990s. There is a reason Gen X-ers have always had an intense work ethic; fear.

How do you get back on track in midlife?

When I went through my dark times last summer I was stunned by how little there was available to help get midlifers back on track. When I tried searching online for midlife crisis, or midlife career change I either got stories about men with balding pates and Ferraris leaving their wives, or ended up on job sites where everything is online and no-one EVER gets back to you. What I wanted was a map, inspirational stories, experts to guide me out of the swamp of doom.

As the weeks passed and the sun shone I began to cheer up. I hung out with my teenage girls, who were home and around because of Lockdown. I swam outside in lakes and ponds and went for long daily walks with my husband. I found the switch from extreme busyness – hundreds of emails, a schedule packed with meetings and calls – to nothing, hard. I felt like I had extra limbs which weren’t being used; I realised I was addicted to busy-ness.

An antidote to ‘busyness’

I took up Qi-Gong online and loved it. I began to meditate and found it calming. For the first time ever I spent time cooking slowly, or listening to music. I spent hours talking to friends, family, former colleagues and found many of them were having a tough time in midlife too. Tales of divorce, bereavement and redundancy were rife. The four-fold increase in eating disorders amongst teens during lockdown had taken its toll on many. Others had elderly or dying parents. All talked about how difficult it was to find the right kind of expert advice.

I began to have an idea. I’ve always loved President Obama’s line about being the kind of change you want to see in the world. Rather than moaning that there was nothing out there to help midlifers get back on the horse and find their next act, I decided to create it. Noon.org.uk has experts to advise on midlife pinchpoints and inspirational stories of transformation. We also run retreats and events. I called this new community Noon because if, like Major Tom, or the Duke of Edinburgh, many of us are going to live till we are a hundred, then 50 is only the middle. Long lives mean we will all have to get used to reinventing ourselves. Many times.

What sticks out about life before

It is grim when life suddenly shifts under our feet and everything that was familiar is ripped away. It is like a death. There is a before and an after. A dividing line. But despite, or maybe because, of going through the heartache, my life has had a prune. It was agonising chopping back all that foliage, the twenty years of accumulated growth, the part of me that was tied up with my job. But I can see now that it has been good for me. It forced me to drill down into why I was doing it in the first place, what really makes me happy, to think about what I want to do for the next twenty or so years of my life. I realised that the work I did at Women in Journalism as Chair setting up a mentoring scheme, helping other women in their careers was where I felt happiest. That as a journalist I felt most purposeful running campaigns that changed people’s lives (we raised £2million for Britain’s poorest children, and £350k in a week for kids on the grim Broadwater Farm estate in north London).

I was lucky enough to have had a glamorous time and meet and interview lots of famous people – but what stuck out for me when I looked back, was the times where I had made a difference; campaigning on the dangers of internet pornography, or the lack of women at the top of public life, the importance of diverse voices being heard.  I resolved that whatever I did next I would stay within that sunny circle, that that was where my best life and purpose resided. I wanted to make sure that the next time someone felt like they had been pushed off a roof as I did the day I was made redundant, they would have somewhere to go for help, advice and a path to a better future. That was why I started Noon.

I’ve hit the restart button and can truthfully say I have never been happier. Leaving my job, though agony at the time, did me good; the shock was brutal, but as a result I have become the person I am supposed to be.  As Raynor Winn, author of The Salt Path, wrote: “Loss sets you free. In the empty void it leaves, anything can happen.”

Eleanor Mills is the Ex Editorial Director of The Sunday Times and the Founder of Noon.org.uk a new platform to empower women in midlife.

2 responses to “I lost the job I’d had for 23 years. My world fell apart but now I am glad”