Wondering what to read? Sam Baker, the host of the Noon Book Club, shares her picks for reading that speak to our experiences. Sign up for her first book club on June 30th here.

Invisible to Invaluable: unleashing the power of midlife women by Jane Evans and Carol Russell (Piatkus, out now)

If you’d asked me eighteen months ago if I thought we could get everyone talking about menopause and midlife women, I would have laughed in your face. (DGMS on the publishing sales directors (male, naturally) who couldn’t see who would buy a book about menopause when we were selling my book The Shift: how I lost and found myself after 40 – and you can too…) But, now Davina’s menopause documentary is nominated for awards and you can’t move for books about the menopause.

(Older) women’s voices are reaching a crescendo – and what we’re saying is Enough! Noon is a key part of this narrative and so, too, is my first ever book of the month. The brilliantly titled Invisible to Invaluable is the brainchild of Jane Evans, advertising industry veteran and founder of the Uninvisibility Project and BAFTA-nominated writer and actor Carol Russell, who, like many women born between 1950 and 1975, couldn’t quite get their heads around the fact that society expected us to sod off and knit once we hit 50. Covering everything from invisibility to intuition to inclusivity to investment, Invisible to Invaluable is their call to arms. I could not recommend it more highly.

Animal by Lisa Taddeo (Bloomsbury)
If you loved Three Women, 2019’s groundbreaking examination of female desire that took the world by storm, you won’t want to miss Lisa Taddeo’s debut novel. After witnessing the suicide of her married lover, Joan leaves New York and drives to California in search of… something else. I read this furious, beautiful novel in a frenzy and I’m not sure I’ll ever forget it. Prepare for everyone to be talking about Lisa Taddeo all over again.

Imagine a world in which Hitler won the Second World War and the royals about to be crowned are Edward and Wallis Simpson. The ruling class is controlling society by rewriting books to “set the record straight”, but somewhere deep in the Widowland slums, where child-free women over 50 have been banished, insurgency is taking root. There are no shortage of alternate histories sloshing around right now (and most of them aren’t a patch on The Power by Naomi Alderman that arguably started this wave) but Widowland is a cut above the rest.

When Anne is diagnosed with terminal cancer, she and her daughter Sigrid and granddaughter Mia decide to take an impromptu trip to France to savour their last days together. But the holiday exposes the cracks, discontent and suppressed conflict that has long tessellated their relationship. A poignant, beautifully written exploration of the mother-daughter dynamic, it’s no surprise that Flatland has been billed as the Norwegian Anne Tyler. In fact, if you’re a Tyler-fan, you just might have found your new favourite writer.

I’ve got a bit of a thing for fiction in translation, can you tell?! And this uplifting international bestseller fits the summer bill perfectly. Cemetery caretaker Violette is the repository for everyone’s secrets – the gravediggers, the priest, the bereaved relatives who come and go – but when the local police chief turns up to put his mother’s ashes on a complete stranger’s grave it turns out Violette has secrets of her own. A book of life, love and letting people in… I know that might sound a bit sugary, but after the year we’ve had, it might just be the book we need.

An extra pair of hands: a story of caring, ageing and everyday acts of love by Kate Mosse (Profile books, 3/6)

Kate Mosse is well known as a bestselling author and founder of the Women’s Prize for Fiction, but what many don’t know about her is that while she’s been doing all this she’s also been caring for the older generation of her extended family: first for her father (who died of Parkinson’s), then her mother and, now, for her indomitable 90-year-old mother-in-law. Extra Pair of Hands is both Kate’s personal story of finding herself a carer in middle-age and a powerful call for society to view age differently. As 8.8 million of us in the UK now find ourselves in this position, this is a timely and poignant call for action.

Available: A memoir of sex and dating after a marriage ends by Laura Friedman Williams (Borough press 10/6)

Laura Friedman Williams had been with her partner 27 years and was the mother of three children when she found out he’d been having an affair. Suddenly single again at 46, she found herself presented with two choices: hunker down and wait for it all to end – or make herself available to everything that life had to offer on the singles scene. Available is her story of “getting back out there” and rediscovering what it even means to have a great sex life.

Bette Howland was an award-winning literary talent until, in 1984, she received a MacArthur Fellowship and never published another book again. But scroll back sixteen years, to 1968, and Howland was a 31-year-old single mother, librarian and struggling novelist who swallowed a bottle of pills and found herself in a small psychiatric ward (the W3 of the title) in a large Chicago hospital. W-3, her recollections of that stay, is the book that made her name, but it’s not so much her own mental health struggles as the picture she builds of the characters that make up W3’s community that make this tough, funny, compassionate memoir resonate.

If you’re looking to immerse yourself in a whole other world this summer, these gorgeous reissues of the five novels known collectively as the Cazalet chronicles have your name all over them. Inspiring passionate adoration in their super-fans (who range from Hilary Mantel to Joanna Lumley to Elizabeth Day), Elizabeth Jane Howard’s classic family saga is the story of the white upper middle class Cazalet siblings from 1937 to 1947 (with the fifth book leaping ahead to the Fifties), taking in war, grief, sex, love, motherhood, divorce and homosexuality- and that’s just off the top of my head. Howard has long been better known for her second husband, Kingsley Amis, but it’s time to set that straight. The Cazalet chronicles are modern classics and Howard is a literary great. (The Light Years. Marking Time, Confusion. Casting Off. All Change.)

The Weekend by Charlotte Wood (W&N 24/6) – Three very different women in their 70s gather to clear out the house of their deceased friend, Sylvie. Without their friendship-anchor, what – if anything – do they have in common?

Summerwater by Sarah Moss (Picador 24/6) – a rainy Scottish cabin park, 12 people trying to staycation, but all is not as it seems… the one that got away from this year’s Women’s Prize for Fiction.

Diamonds at the Lost and Found by Sarah Aspinall (4th Estate 10/6) – an intoxicating memoir of a childhood in thrall to a charismatic chaotic mother.

What I Learnt from Falling by Claire Nelson (Octopus, out now) – one woman’s story of a near-fatal accident that turned her life around.

The Shift with Sam Baker podcast is available on Apple podcasts, Amazon music, acast, Spotify and wherever you get your podcasts.
Twitter @sambaker
Instagram @theothersambaker 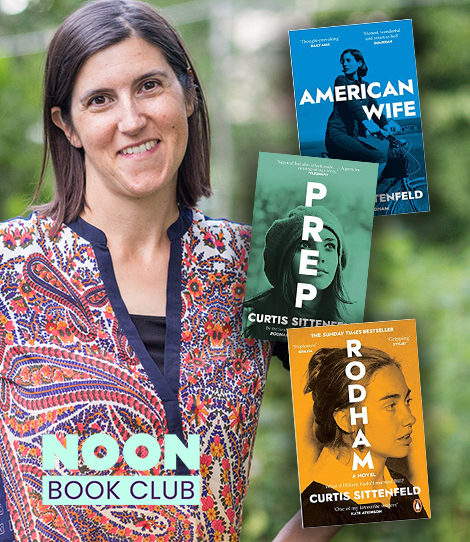 Sign up for our first Noon Book Club with bestselling author Curtis Sittenfeld. It’s FREE this month + you get a copy of the book