In this extract from Rosie Wilby's 'The Breakup Monologues,' an enjoyable trip goes awry... 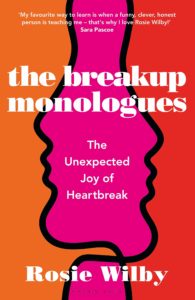 ‘There’s another one. I can get on that. Just slow down. You’re going too fast.’

‘I can’t control this thing if I go too slow.’

‘Great. Have you got the key to operate the gate?’

This is supposed to be relaxing quality time. Girlfriend and I have hired a Broads Cruiser from a marina near Huntingdon and plan to spend several days pootling up and down the River Great Ouse between St Ives and St Neots. Just the two of us… and Dog. The boat has the musty, cramped interior of a 1970s caravan. Washing involves sitting on the toilet, perching under a flimsy cabled showerhead whilst keeping a close eye on the rapidly flooding tray underfoot, hoping to leave enough hot water to be able to clean the plates after dinner. A tiny portable television set has an old-school booster aerial that doesn’t inspire much confidence. The beds seem to be made for people even tinier than us. In a tall thin cupboard where one might hope to find a modern Hoover, there’s a manual carpet sweeper that spits out as much as it removes from the threadbare beige floor. This is all a far cry from the relative luxury of our actual house.

And yet the simplicity of this existence does feel like a relief, free of the relentless tyranny of domestic admin. Here on the boat, there are only basic tasks that can easily be divided up.

Whereas at home, Girlfriend often sighs, ‘I’m doing everything!’

‘Well, that’s because you’ve added a million non-essential chores to the list without even consulting me!’ I say.

Every day, people come round to give quotes for downstairs toilets, sanding floors, removing mould from the garden decking, for conservatories and new kitchens. I can’t keep up with her aspiration. The house is fine. Let’s just live. That’s my philosophy.

And on this holiday, we can do exactly that. There are just a few things we have’ t given due consideration.

First, we do not have a clue how to operate a lock. I’m in a muddle about gates, paddles, keys, buttons and ropes. What order does it all happen in? A gruff man talked us through it when we collected the boat. But I can’t remember any of that now.

Second, and more importantly, we are both due on.

And once you’re over forty, being due on is no laughing matter. We are not gliding around on roller skates or athletically playing volleyball as though we are in a 1990s TV ad for sanitary products. We are both entering the decade-long perimenopausal stretch. Hormonal migraines, emotional upheaval and bleeding so heavy that we feel like we are menstruating for ten women rather than just one are becoming our monthly norm. We’ve got several more years of this before the actual menopause, which apparently will make us feel even worse. And in a lesbian relationship, the upheaval is doubled. Because there are two of you going through it.

A lesbian relationship, particularly after the age of forty, is a game of Russian roulette. Whether or not you have a good day is almost entirely governed by where you are in your cycle and where your partner is in hers. It’s as prudent to mark her period in your diary as your own. After all, her hormonal chaos is going to have a direct impact on you … especially if you are trapped together in a very confined space, doing something stressful and unfamiliar. Even Dog has picked up on the aura of anxiety, barking and crying every time we enter one of the dreaded locks.

There is a third element compounding my sense of misplacement. It is August. I should be performing at Edinburgh Fringe – a compulsory hell for comedians. But this summer I have prioritised getting booked at other artsy festivals, Nozstock, Port Eliot and Wilderness, and am going to concentrate on writing a book proposal instead. As Girlfriend settles in the cockpit behind the wheel of our underpowered, unwieldy vessel, I sit out on the front sundeck scrolling through Facebook. There are several posts from The Bisexual Comedian about selling out her show or how the shade of her lipstick matches her poster … or whatever. Somehow these declarations irritate me and fire up a silly sense of rivalry. God I hate social media. It turns out that Edinburgh Fringe month is miserable for a comedian even if you don’t set foot in Scotland. What am I doing with my life? I haven’t even started the book proposal.

My straight female friends of a similar age tell me that they are also experiencing some kind of crisis and often take it out on their partner. Journalist Miranda Sawyer, author of a book about midlife, says, ‘It’s to do with your attractiveness, your relevance and who you are. And with women there’s obviously a hormonal thing as well. Perimenopause and menopause can mess with your head and can make you want to smash your relationship up into bits. One of the things that sometimes happens is you get a strong rush of sexual hormones and you might fancy someone completely inappropriate like a teacher at your kid’s school. But mostly what you want to do is to break up with your old self.’

Tennis champion Chris Evert has spoken about how the menopause contributed to the ending of her eighteen-year marriage to skier Andy Mill. Women’s magazines ask, ‘Will your marriage survive?’ While the Daily Mail, unsurprisingly, flips this on its head and ponders: ‘Why all men should fear the menopause.’ Apparently we women become unplugged from our nurturing ‘mummy’ brain circuits and apply ourselves to new or long-dormant ambitions. Perhaps that is why there was a 15 per cent increase in divorce rates among the over-fifties between 2018-2019, largely initiated by women who wanted something different once they’re no longer driven by needing to find the father of their children.

Yet Girlfriend and I have never even had children. Our mothering instincts attach themselves to Dog and Cat. But is that enough to hold us together through this emotional rollercoaster ride?

My friend, the brilliant cabaret artist Sarah-Louise Young, is researching menopause for a performance piece. She has spoken to many women who see this life stage as ‘part of a long overdue appointment with oneself as one gets older’, a sort of check-in and opportunity for reflection. The comments on her post asking: ‘What do you think of when you see, hear or read the word menopause?’ unsurprisingly include several colourful descriptions of the physical symptoms of bleeding, mood swings and hot flushes. Yet they seem to be far outweighed by those using more uplifting words to describe a huge psychological change that accompanies the more inconvenient physical one – ‘freedom’, ‘relief’, ‘power’, ‘joy’, ‘transition’, ‘transformation’, ‘regeneration’, ‘celebration’, ‘release’, ‘reawakening’, ‘new chapter’, ‘new phase’ and my favourite, ‘ Autumn Queen’. This all sounds like more of a midlife rebirth than a midlife crisis. Bring it on. Some revel in ‘eventually owning my own body’ or being ‘able to define myself as an individual, not just as an adjunct to men’.

Relationships struggle when our paths and goals diverge, when we cease to evolve at the same rate as our partner. No wonder, then, that women are outgrowing their marriages in droves and liberating themselves from a perceived stagnation and invisibility. Commenting on Sarah-Louise’s thread, Christine says, ‘I’m one of those statistics.’ She left her husband and life in the UK to pursue a career in acting and to ‘rediscover the real me. She’d disappeared. I found her again. I love her.’ How can poor men possibly keep up with our renewed sense of urgency, our quest for meaning, at this critical juncture? Or, rather more pressingly for me, how can women keep up with one another? I’m a few years further along my soul-searching perimenopausal path than Girlfriend.

And, right now, that soul-searching is inspiring a fantasy where she disembarks and I abandon her on the riverbank, shouting a rapid cycle of apologies and swear words after me as I power away on a new adventure, our cruiser transformed into a slick speed boat …

The sky is getting dusky. We are pushing up to maximum velocity. We are panicking about where to moor up for the night, having already rejected one perfectly good spot. Ever the strategist, Girlfriend has printed off a detailed itinerary of dog-friendly riverside pubs, timings and distances between places of interest. But now, distracted from our original plan, we want to forge ahead to St Neots, where Angie and Liz have agreed at the last minute to join us for a picnic the next day.

‘I’m looking forward to some other people turning up. You’ll start being really nice again.’

A man waves and shouts as we power through his marina.

There is a hellish lock near Godmanchester, where the wind sweeps across perpendicularly to your direction of travel. When we passed through it in the opposite direction, we bickered. But we have no time to faff about now. The pressure is on. I leap out more elegantly this time to open and close gates in a perfect slick system. Girlfriend and I do a high five. We have learned a new skill together, and have finally stopped fighting. Our fingers may have hovered over a metaphorical self-destruct button. But they are inching away now.

As we approach a large open park, we veer towards the mooring area. Alongside the official metal-edged concrete platform is a knobbly grassy verge.

‘We can just moor up there can’t we?’

‘Look there’s some people over there… hello? Can you help us… ?’

Girlfriend jumps into the shallow water and starts digging the propeller out of the sandy mud with one of the mooring poles. She is in her element, saving the day by doing something physical and strong. She looks happier than I’ve seen her all week. A man and a woman run over, roll their trousers up and start pushing and gently rocking the boat.

Soon we are moored more legitimately, thanking the helpful couple with one of our emergency bottles of Malbec and heading into town to get a takeaway curry.

As we sit at our folding picnic table, ravenously tucking in and giggling about the unusual array of pickles, I wonder how we have survived such a tetchy few days.

‘It does hurt when you shout at me.’

‘I think I’ve been a bit cranky with you since our party because I didn’t feel like we were equal partners in it.’

I thought our barbecue had been rather fun. But now I come to think of it, I suppose I was a little distracted.

Extracted from The Breakup Monologues: The Unexpected Joy of Heartbreak by Rosie Wilby (Bloomsbury, £16.99). Available to buy now.